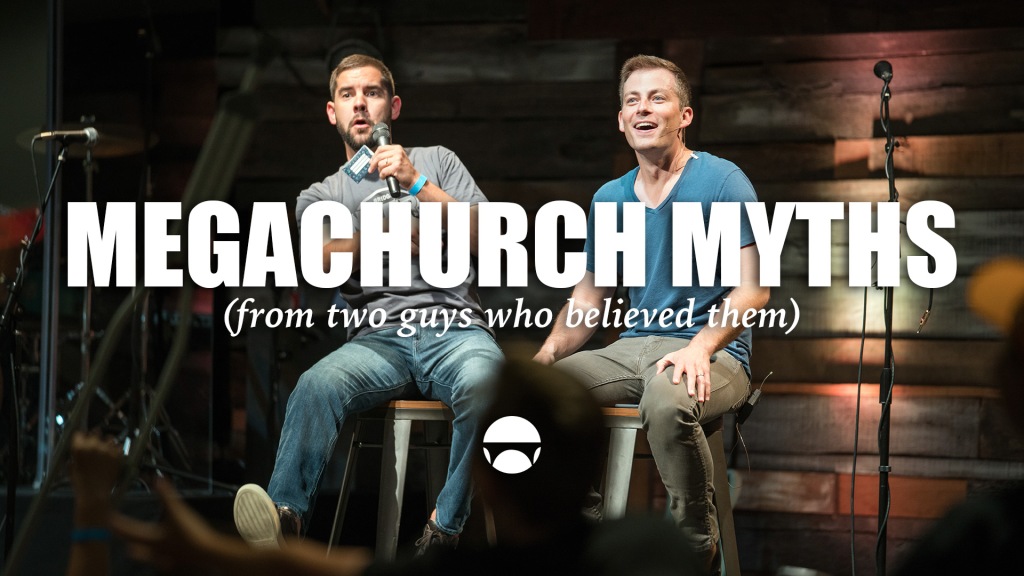 So, Matt Svoboda and I decided to co-author an ironic post to dispel some of the most common misconceptions about large churches. Matt and I have a unique perspective because between the two of us we’ve seen The Bridge as a house church with 15 people as my Dad was planting her, and now seen it as a ‘megachurch’ of ~2,000 people as we’re both Executive Leadership Team members – Lead Pastor & Executive Pastor of Ministries. Here are five “megachurch myths” both of us believed (and ranted about on blogs since-deleted!), only to later discover were just myths…

I used to think this (strongly), so it’s been surprising that the opposite of this has been true as our church has grown. The larger our church has gotten the less and less expensive it’s become to minister per-person (it costs about $100/person less to minister now than when the church was ~100 people). We also spend a considerably lower percentage of our annual budget on staff salaries than we did when smaller, having reduced that percentage by over 10% as we’ve grown. This, in turn, has enabled us to give away MUCH larger amounts of money – The Bridge just crossed the $1 million mark in money given away to world missions!

MYTH: megachurches are personality cults that revolve around the Senior Pastor!

Again, our experience is that the larger our church has gotten, the less Senior-Pastor-centric it’s become. When we were much smaller, there seemed to be a high demand for everything to be done by me (Josh) because I was “The Pastor” –– preaching, counseling, organizational leadership, weddings & funerals, assimilation, and discipleship ministry all had to be led by me personally. As our church has gotten larger, however, we’ve raised up and empowered teams of pastors rather than everything centering around one pastor. For example…

MYTH: people’s spiritual gifts aren’t used in megachurches –– everyone just comes to watch the Senior Pastor preach. Only “the mouth” is working!

Again, this may not be everyone’s experience, but the opposite has happened as The Bridge has grown. From a percentage standpoint, the amount of weekend attenders using their spiritual gifts in ministry roles has DOUBLED as our church has grown. Around 5 years ago when our church was 1/6th the size it is now ~30% of our people were using their gifts in ministry roles. Now, that number is ~60%.

The significance of the roles we’ve been able to empower volunteer ministers into has also increased. Volunteer preaching, oversight of Guest Services, Assimilation, organizational leadership, oversight of the Senior Pastor, and even volunteer worship leaders lead services at The Bridge regularly. Volunteers from the church body are leading in far more significant roles now than at any other time in our church’s history.

Two thousand years ago, Luke, by the inspiration of the Holy Spirit wrote…

It’s simply unacceptable to me as a pastor that any church that believes heaven and hell are real would not care about “the numbers” when God wants to “add to their number daily.” In talking to people though, I think what they really mean is the next myth…

MYTH: megachurches are huge and impersonal with no pastoral care.

First, this was really counterintuitive to me, but the percentage of people in Community Groups (our front-line level of pastoral care) at The Bridge has INCREASED as our church has grown. We’ve moved from ~40% to ~70% in the last 5 years. Second, I’ll readily admit, this is probably because of my personal weaknesses, but when we were smaller and the pastoral care had to be done by me, it was simply much, much worse. Now, we not only have a full-time pastor anointed with mercy and counseling gifts who leads a team of volunteer counselors with the same gifts, there are 4 layers of pastoral care in our church compared to the 2 layers I tried to oversee in my spare time (and outside of my giftedness!) years ago. It’s simply a fact that as our church has grown, we’ve been able to care for people better.

One tough thing about this topic is no two churches are the same, but people often lump all megachurches into one monolithic stereotype. Some of the myths above could be true about some megachurches. Elevation Church and The Village Church are two extremely different churches with their own extremely unique strengths and weaknesses. Some of these myths can also be true of smaller churches. Not every smaller church is great with money, very personal, and awesome at utilizing people’s spiritual gifts, but we thought it was worth addressing the most common misconceptions people have (and we used to have) about megachurches.

None of this is to say there aren’t strengths and weaknesses of different church sizes. As Tim Keller has pointed out, no church size is superior to another, they all come with different advantages and disadvantages. It’s worth quoting him here…

Every church has a culture that goes with its size and which must be accepted. Most people tend to prefer a certain size culture, and unfortunately, many give their favorite size culture a moral status and treat other size categories as spiritually and morally inferior. They may insist that the only biblical way to do church is to practice a certain size culture despite the fact that the congregation they attend is much too big or too small to that culture… There is no “best size” for a church. Each size presents great difficulties and also many opportunities for ministry that churches of other sizes cannot undertake (at least not as well). Only together can churches of all sizes be all that Christ wants the church to be.

Rather than moralizing church size cultures and fostering resentment between them, we should simply celebrate the unique works of God in the midst of each. As Ed Stetzer has said, “God has used the megachurch to reach Korea & the house church to reach China. We should hold models loosely & Jesus closely.“

Begin typing your search above and press return to search. Press Esc to cancel.